Working with Skanska, Ainsworth Civils worked on a scheme to provide additional capacity on the roundabout at the A34 Milton Interchange, thereby enhancing Science Vale’s connections to the national road network by improving the operation of the area’s gateway to the A34.

The Milton Interchange will benefit from a new ‘hamburger’ style roundabout layout, while the Milton Park Link will also be widened to four lanes eastbound on the A4130 and on the A34 slip road southbound. As this is an area of significant growth, the project has been designed to enable the local road infrastructure to meet the demands of the forecast increase in jobs and traffic in the area, resulting from an additional 14,000 homes and 16,000 jobs expected by 2029. Oxford County Council’s cabinet member for transport David Nimmo-Smith said the work would boost capacity by 30%.

The project was divided into three phases, with Ainsworth Civils delivering the overall bridge construction works at the Milton Interchange. The scope of work covered the construction of pile caps, wing walls, bridge deck, deck steel fixing and concreting, assisting with landing the precast bridge beams as well as the bridge parapet support system.

Tackling unforeseen steel reinforcement and design issues head on, Ainsworth Civils brought the project back into the initial timescales by cutting and bending the steel to the required dimensions on site rather than waiting for long lead time deliveries. The Ainsworth Civils site manager also collaborated with other site managers to resolve on site issues and avoid costly delays on the project.

Working between live lanes of traffic, Ainsworth Civils delivered results in four weeks, rather than the initial estimate of seven weeks, while maintaining their 100% health and safety standards record.

Asked to accelerate, Ainsworth Civils also brought this part of the project in ahead of schedule, delivering results in ten weeks instead of the estimated 14 weeks as well as maintaining their usual 100% health and safety standards record.

Ainsworth Civils’ involvement in the design of the temporary works not only saved Skanska time on their programme but the design allowed them to continue their earth works while Ainsworth Civils bridge deck construction continued overhead – thereby saving massive time on the overall programme.

“Ainsworth Civils was easy to work with and adapted to our programme to achieve planned completion.”
Greg Nemedia, Managing Quantity Surveyor, Skanska IS

“Ainsworth Civils proved to be an adaptable subcontractor and willing to assist to meet programme and costs.”
Neil Forbes, Project Quantity Surveyor, Skanska IS 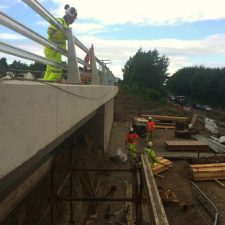 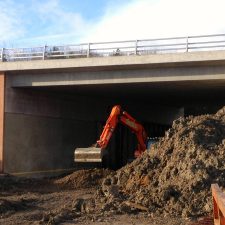 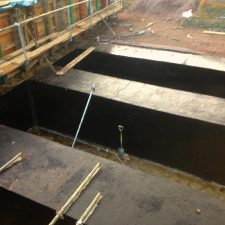 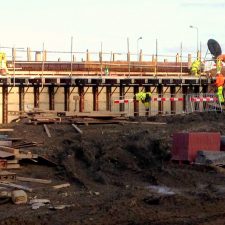