Ainsworth Civils worked with Balfour Beatty on the construction of H16 Footbridge as part of the East Wick & Sweetwater project.

In March 2015, it was announced that Places for People and Balfour Beatty had been appointed to bring forward plans for two new neighbourhoods; East Wick and Sweetwater, which would contribute to the legacy transformation of Queen Elizabeth Olympic Park and provide a new, diverse and vibrant part of East London.

The East Wick and Sweetwater project is based on the provision of a new through road in preparation for the housing development which is running concurrent to the bridge installations.

The initial work package was for FRC including the abutments, slabs and retaining walls which required an F6 finish. This consisted of either a semi-circular or trapezoid pattern to concrete faces. Ainsworth Civils’ value engineering successfully proposed a timber pattern which was set out and formed on site reflecting the trapezoid design details. This provided both programmatic and cost savings to the project whilst Reckli was used for the semi-circular design.

The bridge was successfully installed, with an Ainsworth Civils team on standby to facilitate a smooth installation. Bird spikes were installed prior to the lift and once in place, Ainsworth Civils progressed with the grouting around the bridge connection points.

Ainsworth Civils’ scope of works increased to aid in the commissioning of H16 successfully. This involved drainage for the surface water to the West structure along with connecting into existing chambers with associated time scales. It also included the finished concrete slabs which featured a brushed finish falling into the bespoke Aco drain which was also installed by Ainsworth Civils.

The H16 foot bridge is now successfully commissioned for public use whilst the H14 road bridge enabling works have commenced. 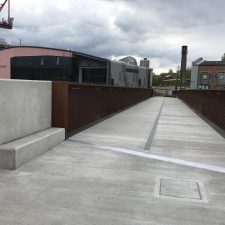 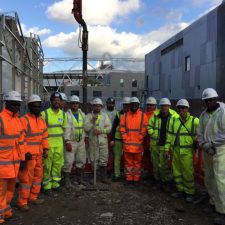