Dungeness A is a legacy Magnox power station that was connected to the National Grid in 1965 and has now reached the end of its life. It consisted of two nuclear reactors producing 219 MW of electricity each, with a total capacity of 438 MW. At the end of 2006 Dungeness A station ceased power generation. Defueling was completed by 2009 and the turbine hall demolished in 2010. The area was replaced by an intermediate level waste store in 2014. The waste store and reactor building would then be placed on a care and maintenance basis until 2103, with final site clearance and closure by 2111.

As part of the decommissioning phase, Ainsworth Civils were awarded the contract by Balfour Beatty to install a 300mm C50 reinforced concrete raft slab to include a 400 wide x 350mm up stand inclusive of casting in sixteen sets of four holding down bolts. The slab would provide the foundations of an Intermediate Level Waste (ILW) Handling Facility at the Dungeness A site within the radioactively controlled area. This building is a crucial part of the decommissioning process as all items of plant that are being removed from site are required to pass through this cleaning facility, undergoing checks and reducing radiation levels to allow them to safely leave the site.

With the new slab being put in, all the underground drainage needed adapting to ensure continuity of access. This included raising manhole chamber covers and replacing drainage channel lids with new precast slabs to meet new levels. Due to the high risk of dangerous radioactive materials being within these drains, correct safety procedures were paramount. A radioactivity safety engineer had to be present at all times to monitor exposure levels with a Geiger counter to ensure the safety of all operatives.

Once the ILW Conditioning Facility Building had been erected on the concrete slab, Ainsworth Civils constructed a new concrete access ramp into the building and realigned the access road and kerbs.

Health and safety issues extended beyond the usual remit in this case, covering radioactive protection to all staff and plant personnel to eliminate the risk of contamination. All operatives were also checked and validated for security purposes due to the nature of the site. 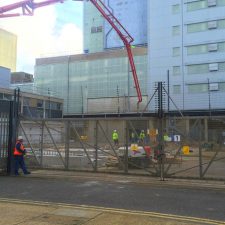 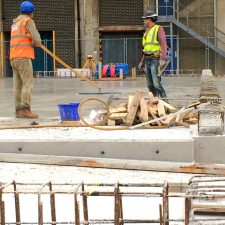 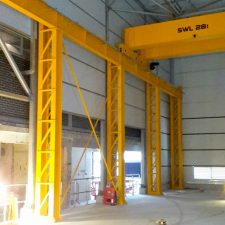 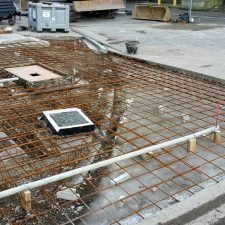